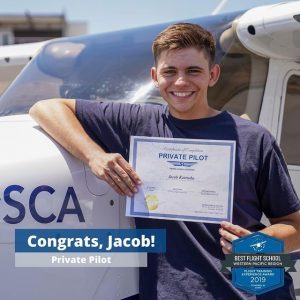 C/Lt Col Jacob Kottraba, who is the Cadet Commander of Squadron 131 of the Arizona Wing, earned his certificate by passing his FAA private pilot practical test with Sierra Charlie Aviation at Scottsdale Airport. He began his flight training at the Civil Air Patrol Powered Flight Academy at Nacogdoches, Texas.

Jacob’s interest in the Air Force led him to join Civil Air Patrol several years ago. During this time he has had many opportunities to explore future career opportunities. Eventually he learned about Air Force Special Warfare and developed a passion for becoming a Combat Rescue Officer.

As a part of working towards that goal, Jacob has attended the CAP Lone Star Emergency Services Academy in Texas, the Arizona Wing Wilderness First Aid certificate class, and the Maricopa County Sheriff’s Basic Search & Rescue academy. He has been on the Wing alert roster for more than two years and has earned two Find ribbons from the Air Force Rescue Coordination Center. As a certified search and rescue technician he has also been able to work with canine teams from both TSA at Sky Harbor as well as CAP.

Jacob has also attended the Space Command Familiarization Course at Peterson AFB in Colorado and Cadet Officer School at Maxwell AFB in Alabama. He was also invited to the Chandler Mayor’s Teen Leadership Academy.

In early 2019 Jacob applied to the CAP Powered Flight Academy where cadets have an opportunity to take their first solo flight. After the PFA Jacob applied for and earned a Cadet Wings scholarship. He has been flying with instructor Julie Frew for the last several months.

Jacob, who is a senior at Lincoln College Preparatory in Chandler, Arizona, has enrolled at Embry-Riddle Aeronautical University to pursue a degree in Global Security and Intelligence Studies with a minor in Russian.